Boa constrictors, also known as common boas or red-tailed boas, are one of the best-known snake species – native to the tropical regions of South America. They are also one of the largest snakes, growing up to 15 feet.

With 4 recognized subspecies, these snakes vary significantly in color. Additionally, breeders have come up with numerous color morphs, as they are one of the most sought-after snakes to be kept as pets.

Here are the 4 recognised subspecies, with the red-tailed boa being the nominate subspecies.

Many other snakes have been suggested as subspecies to Boa constrictors based on appearance or their distribution range. Some of these are no longer considered, while others, like Boa nebulosa, Boa sigma, and Boa imperator, have become individual species.

Since these constrictors are one of the most popular snakes species to be kept as pets in the US, as well as around the rest of the world, there are several amazing color morphs, with the following being relatively common:

They can grow anywhere between 3 and 13 feet (1 and 4 meters) long, depending on their habitat and prey availability. Though counted among the largest snakes, boa constrictors are much smaller than snakes like the Burmese python, green anaconda, and reticulated python.

They can often grow 12-14 feet long in captivity, with the largest documented boa constrictor skin at Bavarian State Collection of Zoology (Zoologische Staatssammlung München) measuring 14.6 feet (4.45 meters) without the head. The body weight of a full-grown female can be up to 27kg (60lb). Some specimens can even be as heavy as 45kg (100 lb) on extremely rare occasions.

The color can vary considerably between populations based on what kind of habitat they live in to help with camouflage. The base colors include brown, tan, gray, and cream, covered in patterns like stripes, diamonds, spots, or bars in shades of green, yellow, red, and dark brown. Typically, the dorsal side is covered in saddle-shaped markings that grow more prominent towards the tail.

Their arrow-shaped head, with distinctive markings, is one of their primary identifying features. A dark line runs from their nostril to the back of their head. Another triangular marking lies between the snout and eye on both sides, continuing behind the eyes and running down towards the jaw.

Despite being a large snake from the Boidae family, they do not have labial pits in their head. So, they use the heat sensors in their mouth and their excellent vision to understand their surroundings, much like other snakes typically do. Unlike many colubrids, these boas have a vestigial (non-functional) left lung along with the large and functioning right one.

The males have longer tails to accommodate the hemipenes and longer pelvic spurs — both used for mating and reproduction.

Being constrictors, these snakes are non-venomous and hardly ever attack humans. But they may bite if threatened or cornered, and their bite can be pretty painful, though not deadly.

The Central American specimens are usually more aggressive, so they hiss loudly and repeatedly strike when threatened. Those from South America are much easier to tame. However, like all other snakes, they tend to be more defensive when molting, as they cannot see well during that period.

Still, with their generally peaceful nature, they do well in captivity and are commonly kept as pets. Apart from being popular exotic pets, these snakes are also caught and killed for their skin. In some parts of their distribution, they play an essential role in controlling rodent populations.

Boa Constrictor at a Glance

They are found only in the New World. Their habitat extends through the tropical regions of Central and South America, including Brazil, Bolivia, Argentina, Ecuador, Peru, Colombia, Trinidad and Tobago, Uruguay, Venezuela, Suriname, Guyana, and French Guiana. They may also be found in other Lesser Antilles islands, as well as those off of Belize and Honduras.

There is one introduced population living in Southern California.

They live in various habitats ranging from rainforests, grasslands, and woods, to dry tropical forests, thorny scrubland, semi-deserts, and agricultural lands. But they prefer rainforests because they love the humidity and temperature, better food availability, and protection from potential predators.

It is primarily a solitary species. The snakes do not interact with others, even Boa constrictors, unless it’s their mating season.

The younger snakes are considered semi-arboreal as they may climb into large shrubs and tall trees to forage. But, they turn heavier and more territorial with age. Though nocturnal, they may be seen basking in the sun when it gets too cold at night.

Being excellent swimmers, they are often found along streams and rivers. They are also known to hide in abandoned burrows made by medium to large mammals.

Boa constrictors live for around 20 years in the wild. They have a much longer life expectancy in captivity, living for 20-30 years on average. One snake from the Philadelphia Zoo, called Popeye, is recorded to have the longest lifespan of 40 years, 3 months, and 14 days.

Like other constrictors, these boas are carnivorous, with their diet including small to medium mammals (primarily rodents), birds, and reptiles. There have been reports of them occasionally hunting larger animals like wild pigs, monkeys, and ocelots. The younger snakes eat smaller rodents, amphibians, and lizards, with the size of their prey increasing as they grow.

Since they are ambush predators, These snakes usually wait for their prey to get near enough to strike. However, they may become active predators in places where food is scarce.

First, they grab the prey with their teeth and wrap themselves around its body to cut off the blood flow and oxygen supply to kill it quickly. Once it’s dead, the snake swallows the prey whole. It takes about a week to several months to digest it due to its slow metabolism. They do not eat anything else during this whale period.

They can open their jaws wide enough to fit the whole prey into their mouth. The tiny hooked teeth that line the jaw help with both hunting and swallowing.

Large mammals like jaguars, birds of prey like different eagle species, and reptiles like caimans and crocodiles are known to feed on boa constrictors, especially the smaller, younger ones.

They make a threatening, growling, hissing sound to ward off enemies.

Their breeding takes place from April to August, during the dry season. This species shows polygynous behavior, where one male will mate with multiple females. Still, the females would mate with only one male. As a result, many male boas cannot find a mate, especially since only half of all females breed in any given season. Reproduction is primarily sexual.

During the breeding season, multiple males may fight over a single female. The winning male then mates with the female, lasting from minutes to hours. The female might not ovulate immediately, but it holds the sperm for up to a year and can ovulate sometime during that period.

Once ovulation happens, there is a noticeable swelling around the middle of the body, which looks similar to when the snake eats a large meal. When the female sheds 2-3 weeks after ovulation (post-ovulation shed), it lasts longer than regular shedding (2-3 weeks).

The gestation period is calculated from the post-ovulation shed and continues for 100-120 days. The average clutch size is around 25, but it can range from 10 to 65 babies.

The juvenile snakes are about 2 feet long at birth, growing rapidly for the first 3-4 years of life till they reach the adult length of 6-10 feet (1.8-3.0 meters) and attain maturity. From here on, their growth slows down but continues for the rest of their lives, shedding once in 2-4 months.

Humidity: Since they are tropical snakes, they prefer a lot of moisture, with the ideal range being 60%-70%. Keeping a large, shallow water dish in the enclosure can help. They also need regular misting, especially in summer.

Enclosure: The babies will do well in a large aquarium but need a much larger space as they grow. An average-sized adult needs an enclosure with at least a 10-square-feet of floor space. It should also be 2-3 feet high and be locked and covered at all times because these snakes are good at escaping. There should also be branches to climb, along with tunnels and hollow logs to hide in.

Substrate: Old newspapers and paper towels work well for younger snakes, while carpeting can be a good option for large cages. If using wood chips, ensure the snake does not ingest any, as they can cause internal injuries.

Feeding: They eat dead animals like rats, mice, chickens, and rabbits. The size of these animals depends on the size of the snake. Since constrictors eat their prey whole, these snakes need to be fed with whole animals.

Unlike boa constrictors, ball pythons are an Old World species, usually found in African forests and scrublands. They are also much smaller, growing around 6-8 feet most.

Q. Can a boa constrictor eat a human?

Ans. Since they grow no longer than 13-14 feet, bos constrictors cannot swallow anything as big as humans.

Q. How fast can a boa constrictor move?

Ans. They move in a slithering manner on land and are considered quite slow, moving at speeds of 1 mile per hour. Since they don’t need to chase their prey, this slow speed is not much of a problem. They are fast when striking their prey. 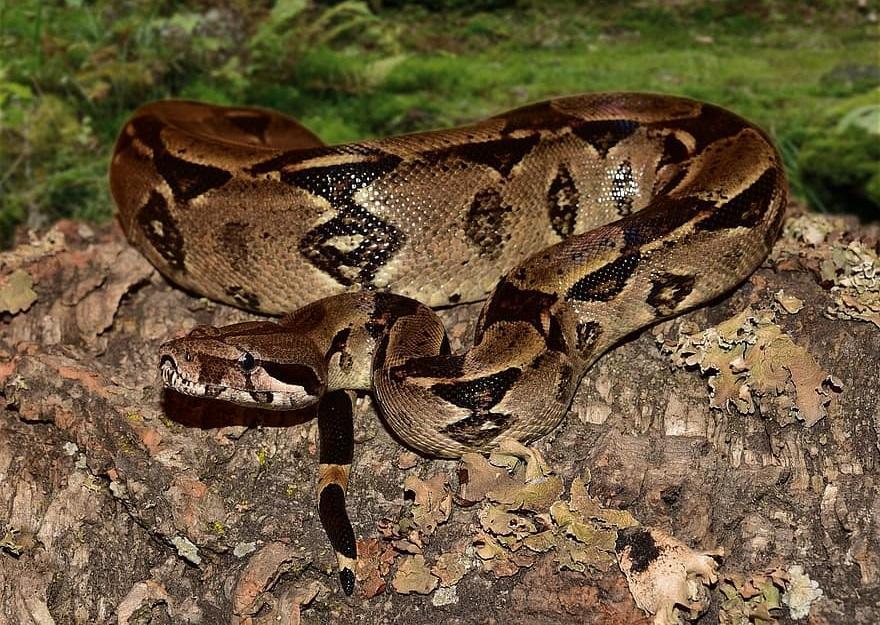