One of the most famous snakes in the world, the green anaconda is one of the four species belonging to the Eunectes or anaconda genus in the Boa family. It is also the largest native snake species in the Americas.

When we think about an ‘anaconda’, this giant snake usually comes to mind.

It is also one of the longest snake species in the world, with the largest recorded specimen being a 17-feet 1-inch female that weighed 214lb 15oz.

People have reported spotting green anacondas over 30 feet, but there is no evidence to back these claims. In the 1900s, the then President of the United States, Theodore Roosevelt, offered a bounty of $1,000 to anyone who could catch a 30-feet or longer green anaconda. The sum has risen to a lofty $50,000 today, but the reward money has not been claimed yet.

Their olive green base color is covered with black blotches down the back. The sides are marked with

similar spots with yellow centers, while the belly is covered in yellow and black scales.

Their head is distinctly narrower than the body, with orange-yellow stripes running down from the sides of the eyes to the jaw.

Even though they are not venomous, the green anaconda is one of the most feared snakes out there, and for a good reason.

Shown in the 1997 film ‘Anaconda’ as ferocious human predators, in reality, they are not as aggressive but still can be pretty dangerous. Being a type of boa, it uses constriction to kill its prey. Even though there are no such records in the wild, it is more than capable of killing and swallowing a human being.

Green Anaconda at a Glance

The tropical regions of South America, through the eastern side of the Andes Mountains in Venezuela, Colombia, Brazil, Ecuador, the Guianas, Peru, Bolivia, and Trinidad, all the way to the northern parts of Paraguay in the south.

Most commonly found in Amazon rainforests in Brazil, the Orinoco basin in Columbia, and the tropical Llanos grasslands.

Slow streams, swamps, marshes, shallow parts of rivers, and flooded grasslands. Though they mostly remain in their watery habitat, a considerable time is spent on land, among thick vegetation.

They are primarily nocturnal and mostly solitary. With such a large and heavy body, the snakes can be rather clumsy on land but very fast and stealthy in the water. Their green-black-yellow coloration provides them excellent camouflage too.

The Oldest Living Snake in Captivity, as recorded by the Guinness Book of World Records, is ‘Annie’ – a 37-years-and-317-days old Green Anaconda.

An apex predator in its range, the adult green anaconda does not have any predators. Juveniles may be killed by tegu lizards, crab-eating foxes, crested caracaras, and larger green anacondas.

Almost anything they can catch and kill, including fishes, reptiles, amphibians, and mammals, including wattled jacanas, collared peccaries, northern pudús, and red-side-necked turtles. The females are known to turn cannibalistic and feed on the smaller males.

Some enormous individuals can feed on larger animals such as caimans, tapirs, deer, and peccaries.

A useful adaptation is the location of their eyes near the top of their head, allowing them to see even when the rest of the

The mating season starts during the rainy seasons, from April to May. Males may fight each other over a single female. The gestation period lasts 6-7 months, after which the female gives birth to 20-40 offspring on average. However, a single litter can contain up to 100 babies. The female loses around half her body weight after giving birth and leaves the babies behind.

The offspring are 2-3 feet long at birth, growing rapidly in the first few years of life till they can reach sexual maturity. The growth rate slows down afterward.

Green anacondas are not easy pets to care for and are suitable only for people with extensive experience in keeping and handling giant snakes.

Temperament: It is recommended to accrue a juvenile snake from a reputable breeder so the keeper can get better acquainted with the snake’s disposition as it grows up. Green anacondas may get aggressive in captivity but are often gentle and docile when it knows the owner from a young age.

Enclosure: A 2ft x 1ft x 1ft enclosure is needed for a juvenile, while an adult can’t be kept in anything smaller than a 6ft long tank. Two-thirds of the area within the tank needs to be land, and the rest should be water. 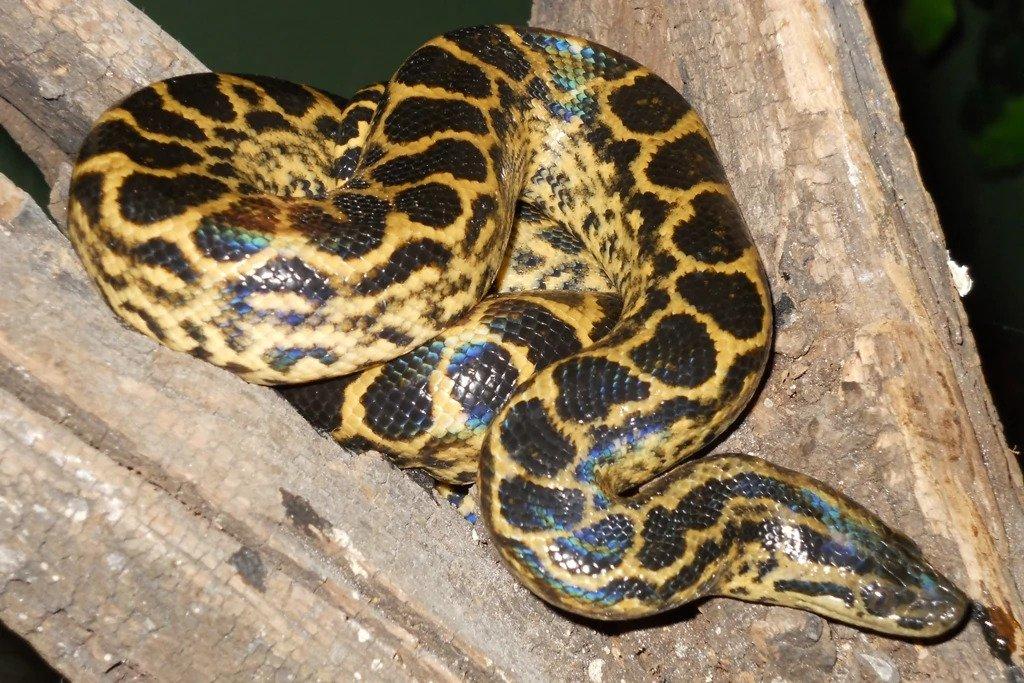