The ring-necked or ringneck snake is a harmless, semi-aquatic, and secretive colubrid. It is primarily nocturnal or highly crepuscular with rare diurnal activity. These snakes do not climb much but can do so while foraging. They exhibit some social structure forming large colonies of more than 100 specimens as well as smaller ones.

This snake has fourteen recognized subspecies.

The juveniles are typically 8 in (20 cm) in size. They grow by about 1-2 in (2-5 cm) in a year, depending on the resource availability and developmental stage.

The dorsal color is solid brown, olive, bluish-gray to smoky black, broken only by a prominent red, yellow or yellow-orange neckband. A few populations in Utah, New Mexico, and other places lack the distinctive neck band. Individuals can also have partially colored or reduced neck bands that are hard to distinguish. Plus, the neck band color may also be more of a cream shade than the conventional bright red or orange.

The head is slightly darker than the body and tends to be more of a black shade than olive or gray. Their ventral surfaces are yellow-orange to red broken by crescent-shaped black spots along the borders. Some specimens lack the distinctive ventral color but do retain the black spots. Rarely does the species lack both the ventral and neckband coloration.

The smooth scales are arranged in 15-17 rows at midbody. The males have small tubercles on their scales just in front of the vent. They are absent in females.

The ringneck snake’s venom is only used for subduing its prey and not for defense. When threatened, instead of biting, it takes a unique defense posture of curling up its tail, showing off its bright red-orange posterior, ventral side. Thus, it plays dead.

If cornered, it can bite as a last resort if it can’t escape. The bite gives a slight stinging sensation but is not deadly. Nevertheless, the wound should be kept clean, and medical attention should be provided.

Ring-necked Snakes at a Glance

Its range includes much of the United States, southeastern Canada, and central Mexico.

The ringneck snake occurs in various habitats. The western and northern subspecies can be found in open woodlands near rocky hillsides, woody debris, and wetter environments with abundant cover. The southern subspecies live exclusively in wet and riparian environments, especially in arid regions. The woodland reptile can generally be found in flatland forests and under wood or scraps.

The dens are shared communally. They make burrows and holes and hide under rocks to avoid the hot weather.

They live for more than 10 years in the wild, with the maximum recorded lifespan being 20 years. In captivity, though, they live for a maximum of 6 years.

Its main predators are black racers, eastern milk snakes, weasels, shrews, and skunks. It is occasionally preyed upon by hawks, owls, domestic cats, and foxes when it ventures out for foraging.

Earthworms, salamanders, and slugs mainly form its food. But it also eats frogs, lizards, and babies of other snake species, sometimes.

It secures its prey by a combination of envenomation and constriction. The snake doesn’t have a true venom gland, but a similar structure called the Duvernoy’s gland located directly behind the eye that produces venom. It opens at the rear of its maxillary tooth, which is used for biting prey.

This snake mates in spring, though some subspecies mate in the fall. The females secrete pheromones from their skin to attract the males. Once a male finds a female, he moves his closed mouth along her body. Then he bites her around her neck ring aligning his body with hers to insert his sperm into her vent.

The female lays eggs in loose, aerated soils in rotted logs or under rocks. Clutches of 3-10 eggs are laid in summer and hatch in August or September. The elongated eggs are white in color with yellow ends. The hatchlings can fend for themselves and don’t need parental care.

Size of the Enclosure: A 10-gallon cage with a mesh top can be used to house a single adult snake.

Humidity: The ideal humidity for the tank setup is 50-80%. A shallow and light water dish should be provided in the cage.

Substrate: 3 inches of sand, potting soil, or peat moss is ideal as the substrate. It should be kept moist by misting the bedding every other day.

Feeding: The pets can be fed earthworms, mealworms, crickets or slugs 2-4 times a week.

Ans. The beautifulringneck snakes are very easy to care for as pets and suit beginners. They are not aggressive and don’t require lots of space. But they are not energetic or entertaining and hide most of the time.
They are very shy at first but can be handled and get accustomed to it over time. The small snake can easily be held in one hand and can even curl around your finger!

Q. Are ringneck snakes poisonous to dogs and cats? 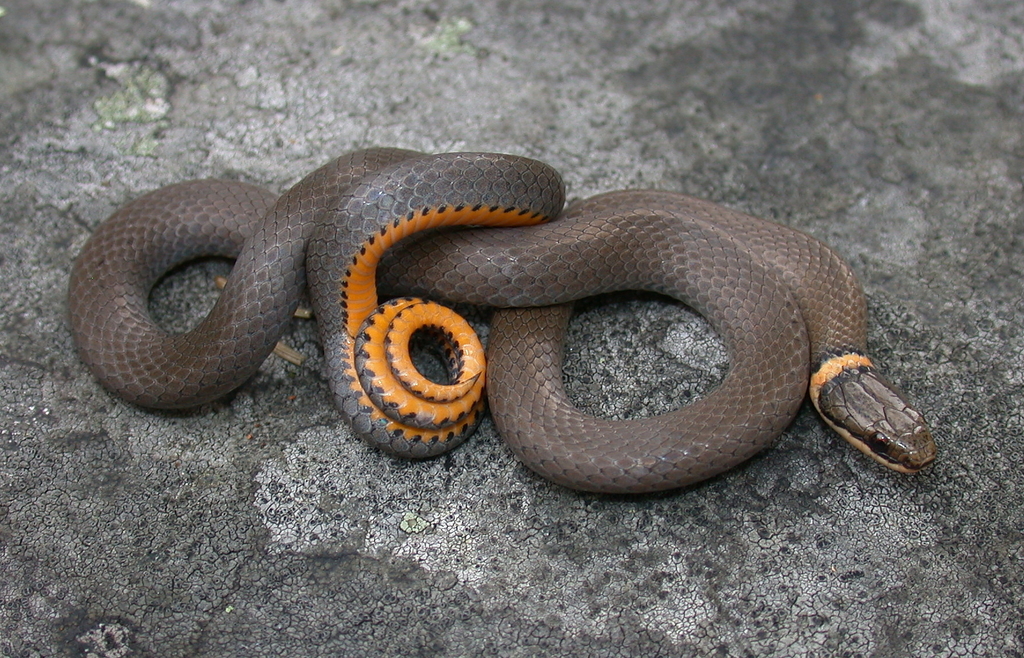