Here are the names of the 4 recognized subspecies:

Adults grow 16-30 inches (40-76 cm) long, with males and females being similar in length — the longest recorded specimen measured at 41 inches (104 cm). However, females can grow broader than males.

They have a dark brown to olive ground color, with three pale, typically yellow, stripes running down their back – two along the two sides and one along the middle. The belly is yellow or greenish-yellow with no distinct markings.

They have keeled scales, with the dorsal scales at the mid-body arranged in 19 rows. These snakes bear certain physical similarities with the eastern garter snake but are relatively slender, with unmarked lip scales. Another difference is that ribbon snakes have lateral stripes on their 3rd and 4th scale rows.

Ribbon snakes have large eyes with round pupils and one white spot at the front of each eye. They have a bright red tongue tipped with black. Juveniles look similar to adults.

They do not bite unless cornered or threatened; even if they do, it does not hurt too much. Though considered non-venomous, the saliva of ribbon snake has been found to have some toxic properties – however, it’s not harmful to humans.

Ribbon Snakes at a Glance

Eastern US through southeastern Canada, extending from the Gulf Coast, including southeastern Louisiana, southern Florida, and southern parts of Ohio and Indiana into south Maine through Nova scotia

Aquatic habitats covered in vegetation, like marshes, lakes, ponds, and streams; Some may live in rocky terrestrial habitats

Ribbon snakes are active during the day, mainly between April and October, hibernating during winter. They prefer aquatic habitats because they can easily catch their prey in the water.

These snakes never use any form of offensive strategies to ward off predators. Instead, they escape into the water or use camouflage and try to blend into their background using their dark brown color. They may also coil up and hide in the grass and bushes, getting low to the ground to avoid being spotted.

Like other garter snakes, their diet includes only cold-blooded animals like fish, salamanders, newts, frogs (including tadpoles), spiders, caterpillars, earthworms, and various other insects

They start getting out of hibernation in spring, and then the mating season begins. Females usually give birth to 4-30 babies in the following summer. They typically breed once or sometimes twice every year.

The juveniles become sexually mature when they are 2-3 years old.

Temperament: They have a docile nature and are easily tamed. They don’t mind being picked up and petted; however, it is recommended to buy a ribbon snake from a reputable pet shop like any pet snake. Catching a wild snake may not be a good idea as their temperament might not be the same, and they may get stressed or defensive if kept captive.

Size of the Enclosure: A 20-gallon enclosure does fine, leaving the snake a lot of space to move around. These snakes are pretty intelligent and tend to escape their tank, given the slightest chance, so ensure it is secure enough, with no openings anywhere. 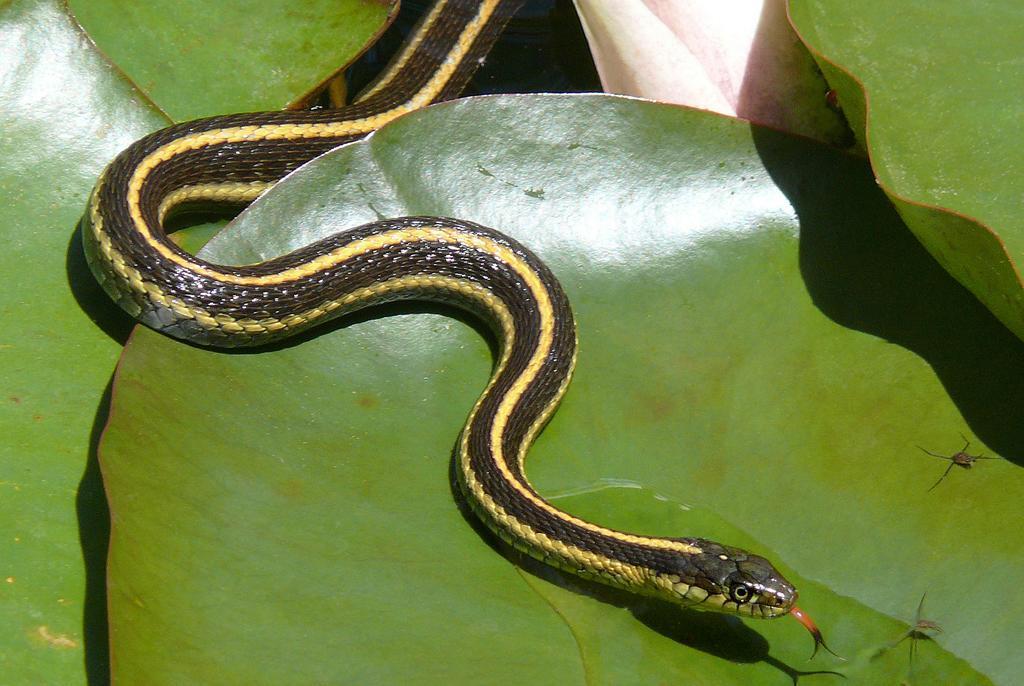