The marine file snake is fully aquatic and is also known by the names little file snake and little wart snake, as it is the smallest of the three members of the family Acrochordidae. It is very sluggish and almost helpless on land but active in the water. It can be identified by its baggy, loose, warty, and rough skin.

It can attain a length of 3-4 ft on average.

The little wart snake has a stout body resembling sea snakes. Its skin is loose and thin, covered with distinctive, almost rough spinose scales. Its color is usually gray with darker or black crossbands. Its small head has minute scales, nostrils on the upper snout, and small eyes with elliptical pupils. Its laterally flattened tail can contract dorsoventrally to help in swimming.

Like true sea snakes of the family Hydrophiinae, the marine file snake has special sublingual salt glands but can still dehydrate in the sea. So it relies on freshwater lenses found on the surface of the sea for freshwater.

The little wart snake is non-offensive and harmless as its bite is non-venomous.

Marine File Snakes at a Glance

The species ranges from India, through southeast Asia, up to the Solomon Islands.

It owes its common name, marine file snake, to its permanent inhabitation of estuaries and coastal areas. It also lives in ponds, mangroves, and seas. During low tides, it is found in saltwater and shallow mud flats.

The nocturnal snake spends most of its time foraging and swimming. During the daytime, it remains burrowed in sea grass or mud.

Its main enemies are crocodiles, sea eagles, and humans, who kill them for their meat.

Fishes in the families Gobiodei, Trypauchenidae, Eleotridae, and small crustaceans form its diet. But it varies regionally owing to its extensive range. Apart from olfaction, it detects the movement of its prey underwater with its specialized tubercles having their nerve endings on the skin between its scales. It kills its prey by constricting.

Females attract males by releasing pheromones. They mate every two years, usually in June or July. 5-7 months is the gestation period. Males produce sperms the entire year that moves to the cloaca through the ductus during the mating season. Sperm levels also increase during the same time when females accumulate large amounts of yolk. The latter can hold the sperms and delay giving birth if the conditions are unfavorable. 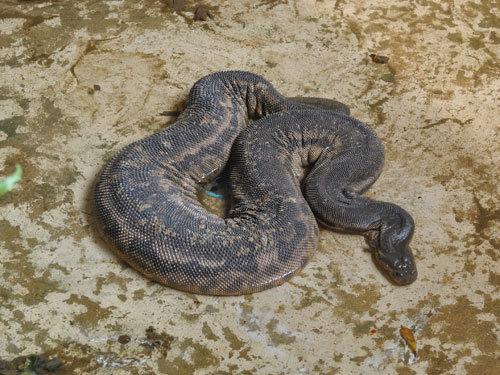