The long-nosed whip snake, also known as Sri Lankan green vine snake, is a mildly venomous, slender-bodied green tree snake native to Sri Lanka. They are diurnal and move slowly, camouflaging themselves in foliage and vines. The main distinguishing feature of this snake is its pointed snout. Arafura File Snake

The colubrids are bright green or pale brownish in color. The skin between the scales is black and white on the dorsal side that appears striped when expanded. There is a yellow line running down each side, ventrally. They are the only snake species with horizontal pupils.

They expand their bodies on being disturbed, showing a black and white scale marking. On being threatened, they may open their mouths and point their heads in the direction they sense the threat to display aggression.

The snake bite is moderately potent and can result in pain, swelling, numbness, bruising, and other local symptoms that subside within 3 days. Bites near the eyes, head and other vital parts could be severe.

Long-Nosed Whip Snakes at a Glance

They occur in the wet zone of Sri Lanka, including the montane rainforests and Sri Lanka lowland.

It inhabits shrubs, low bushes, and trees in lowland forests at elevations of up to 1000 m, particularly in the proximity of streams. It is often found to occur near human settlements.

It lives for around 12 years in the wild and 8 years in captivity.

Its natural predators are birds of prey and other larger snakes.

They prey on lizards and frogs using their binocular vision.

The mating season starts in early summer. They are capable of delayed fertilization. The young are born fully developed and can hunt. 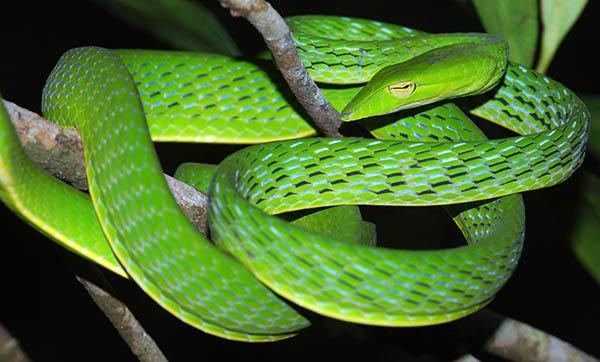