The Cuban boa or Cuban tree boa is a large, muscular, heavy-bodied snake of the boa family that is endemic to Cuba and some of its nearby islands. Its most distinguishing feature is that it hunts in packs. Though the genus name means ‘lips without pits’, this is the only species that having labial pits.

The body color of the Cuban boa is yellow-brown with dark brown or black detailed geometric markings on its sides and back. A pearly layer covers its body, giving it a rainbow glow. It resembles the rainbow luster of gasoline floating in water and is viewed best post-molting.  It has a dark-colored snout and vertical pupils. An extra row of scales separates its eye from its lip. Needle-like sharp teeth in its upper and lower jaw point backward, towards its throat.

Like most other boas, this snake has a mild manner and isn’t inclined to bite. However, some individuals might tend to bite but don’t pose any real danger as they are non-venomous. But you may be left with a mark thanks to its razor-sharp teeth.

As pets, they are very calm with a cool temperament.

Cuban Boas at a Glance

It is found in Cuba and the islands adjacent to it, like Isla de la Juventud, the Colorado Archipelago off the northern coast of Pinar del Rio, the Sabana-Camaguey Archipelago, and the Canarreos Archipelago.

It lives more than 20 years in captivity.

Humans mostly kill it accidentally or out of fear. But it is also used as food.It is itself the largest terrestrial predator of its native land, Cuba.

The Cuban boa mainly feeds on bats but will also take birds, juvenile tortoises, mice, and other small rodents. It constricts its prey and swallows it whole.

Between April and June, males compete to court a female that only mates every alternate year. The female’s fertility is more dependent on its size than its age. Post mating, the females are pregnant for 5-6 months, with the ambient temperatures affecting their gestation period. The litter size varies between 2 and 30. The bigger the size of the female, the bigger the litter and the babies.

Temperature: The temperature gradient should be between 80°F and 72°F. The night temperatures can fall to the 50s as long as the day temperature rises to 80°F.

Humidity: The humidity level in the cage should be 55-80%. 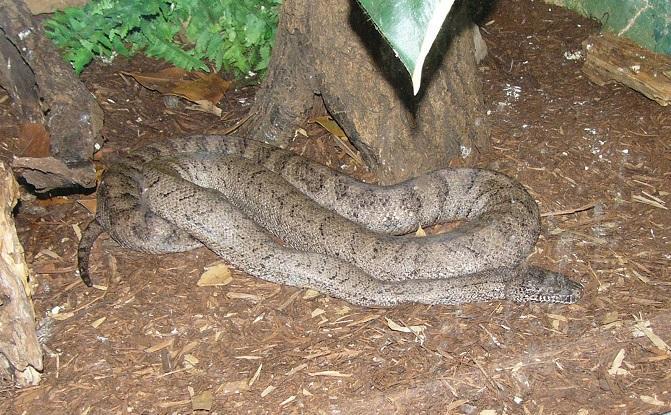